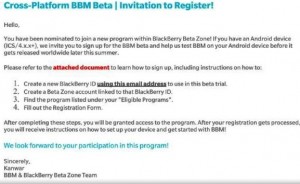 The first invites have gone out to participate in beta testing for the long-awaited (but probably far too late) cross-platform versions of BlackBerry Messenger. The invites are only for registered members of the “Beta Zone” but it might not be too late to throw your hat into the ring – I’m told that not all of the invites have gone out as of yet so now would be the time to sign up if you have any interest. Interestingly, despite owning iOS devices, I got an invite to test the Android beta. I guess it’s the thought that counts.