Blackberry Throws In The Towel 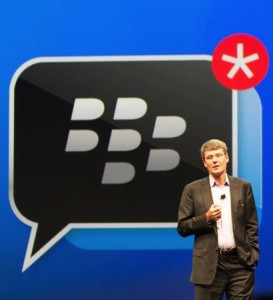 Yesterday the geek world was all a-twitter (heh) about the announcement from Blackberry – neé Research In Motion – that Blackberry Messenger was coming in app form to both iOS and Android this summer. Thorsten Heims put on a brave front, and tried to spin this as a disruptive and preemptive sort of a move, but it is nearly impossible to look at this as anything but a tacit admission that while the smartphone wars may rage on, they are going to rage without Blackberry as any sort of relevant player.

There are only three possibilities as to what the Blackberry brain trust is thinking here, and how the move will play out. To wit:

No matter how you work this one out, the end game comes out a stalemate at best, and a stalemate does Blackberry no good at all. Either the movers and shakers at Blackberry still have no clue as to why the mobile computing business has trampled them and left them writhing in the dust, or they have finally seen the writing on the wall and are now just throwing things out there in sheer desperation.

My money is on the desperation.