This is probably the single most useless application of modern printing and digital imaging technology on the planet. Who could possibly want a $200 programmable pancake batter pourer?

Me, that’s who. Me me me me. This is totally stupid and completely wasteful and I want one. Really, really want one. Please and thank you. You can also get a swank red one for a couple of hundred bucks more, but that’s pretty much gilding the pancake lily. Black is just fine. 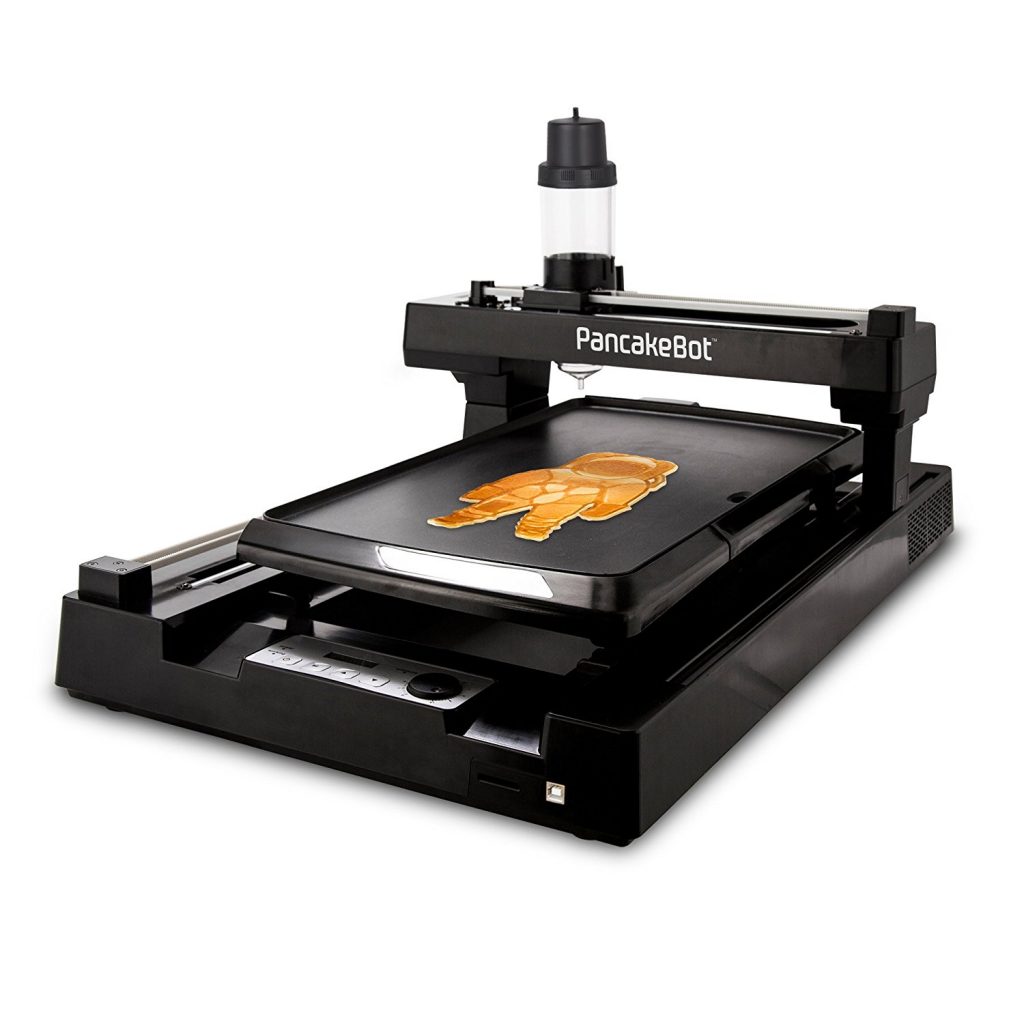 UPDATE: Mashable has a cool video of the thing in action – check it out.

There is an old adage that says “If you are good at technology, you can be good at anything” … and that includes darts. All it takes is an engineering degree, a lot of free time, and some seriously inspired design. Presenting the Automatic Bullseye Dartboard! 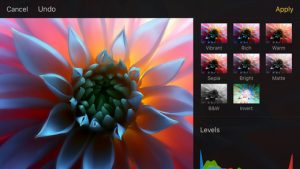 Quick and dirty: Pixelmator is the best image editing software for iOS, period. And that’s a real fact, not some alternative one. Right now it’s on sale on the App Store for a measly 99 cents but that price won’t hang around so you need to get it right now.

Doesn’t matter if you are an average dabbler or an actual design pro, you want Pixelmator. Does everything … image editing, touch-ups, sketching, compositing, talks to your Mac, talks to Photoshop, just quit reading this and go buy it, okay?

The Best Mobile Safari Tip You Will Get This Week

Unless you live in some sort of odd 1998 time bubble, or are inexplicably using Internet Explorer for something other than demonstration how not to write a browser, you probably use browser tabs pretty much all the time. Listen: As positive developments go, browser tabs are right up there with sliced pizza and the polio vaccine.

Being a clever tab user you are probably also familiar with – and beholding to – the “Undo Close Tab” function. As an extension to that familiarity you have probably cursed out Mobile Safari more than a few times for not having the same function. Sure, you can bring up your history and swipe down to the tab you just closed, and hope like hell you didn’t open it three days ago because now it is about 1,437 items down the list, and … stop. Just stop. Calm down. Mobile Safari does have a “reopen closed tabs” function; you just haven’t found it yet.

Let’s do some finding.

First, tap on the “Show Tabs” icon at the bottom of the screen:

Then tap and hold the “New Tab” icon at the bottom of the tabs view screen:

Life, as the kids say, is good. You’re welcome.

The Best iCloud Tip You Will Get This Week

If you have multiple devices using iOS and OS X you are probably at least passingly familiar with iCloud Drive. For the most part, it’s entirely seamless – especially from the iOS side, where you don’t even have to think about the thing at all. Open an app, and voila! The list of all the comparable files on your iCloud Drive is there and waiting for you. Save a file, and (at the rest of sounding repetitive) voila! The file is automagically saved to iCloud Drive, no muss, no fuss, no wondering if you put it in the right spot.

Sometimes, however, automagically is not exactly what you want. Once in a great while you might find yourself wanting to be able to take a quick look at the stuff stashed away on your iCloud Drive – figure out if you have a file without opening the associated app, rename files to help keep things obvious with a collaborator, share a file, whatever. If you are sitting at a desktop you can just point your browser to iCloud.com and off you go. But if you are on mobile … are you pooched?

No, of course not. There is a not-overly-secret but also not-entirely-obvious switch in your iOS settings that will reveal the hidden iCloud Drive folder that sits on all of on your iOS devices. It’s three simple steps and totally painless. Ready? Let’s begin.

One: Go to your iOS settings and tap on “iCloud” – it’s in the section below the items that run from “General” to “Privacy”. You will be presented with this screen:

Two: Tap on “iCloud Drive” and you will see a screen like this. Flip the switch labelled “Show on Home Screen” to on:

(NOTE: Obviously the master iCloud Drive switch at the top of this screen needs to be set to on as well. I probably don’t have to tell you this.)

Three: That’s it. Done. Return to your home screen(s) and your will see the iCloud Drive icon – it looks like this:

Tap it, and there are all your cloud files, arranged by application. From here you can long-press on any item in a folder to bring up a menu of file operations, or “pop” them with force-touch to see a preview:

Done and done. Amaze your friends. Boost your productivity. Be cool.

You may be aware that the latest generation of Apple TV went on sale yesterday. You may also be aware that the new box features some absolutely eye-popping screen savers – slow-motion hi-def flyovers of locations from around the globe, tuned to your current time of day.

What you might not be particularly aware of is the work of an exceptionally talented Swift programmer named John Coates who has crafted an OS X screensaver that brings these exact same flyovers to your computer desktop. Aerial is free, completely open source, and ready for your downloading pleasure right now. If you have one of the new 4K iMacs, this will blow your mind. If you have any other machine, well, it will still blow your mind, just not as much.

Those 4K iMacs are the bomb.

A couple of notes:

This is written in Swift, so you have to be running at least OS X Mavericks to enjoy it.

It is truly open source so you can use it to learn a little bit about Swift, or – if you are already a Swift guru – you can help contribute to or collaborate on the project.

If you aren’t familiar with GitHub and the downloading and building process here is an easy shortcut: Scroll down on John’s page to the section headed “Download” and then click on the link where it says “Download from GitHub”. Then just unzip the downloaded file, double-click on the file called “Aerial.saver” and allow OS X to install it. After that you can use it like any other OS X screen saver.

Finally, if you are planning on selecting only a few of the choices and would like to see a large (and gorgeous!) preview of all of the different locations and times, head over to Benjamin Mayo’s page for a complete set of views and browse away.

One Tiny Thing About Blackberry

It was almost three years ago that the fine folks in Waterloo decided to open up the Blackberry Messenger platform to other mobile OS players. At the time I wondered what the possible business model was going to be once the dust settled. There were three more-or-less realistic ideas on the table, none of them particularly enticing but at least legitimate possibilities.

Well. Talk about blindsided … the real answer is “none of the above”, a.k.a. junking up the user experience with ads and then trying to extort users to pay a monthly fee to get rid of them. This is usually the playground of skeezy copy-and-paste game publishers, not legitimate and established technology companies.

It’s unseeming at best. Amateurish at worst. And downright embarrassing either way.

Wow. I was so wrong. So staggeringly wrong. Like Tim set out to personally make sure I was the wrongest wrong person ever.

Yesterday I oh-so-casually mentioned in passing that – as with previous “S” models” – one of the biggest upgrades would be to the camera and imaging system. So big, in fact, that the new camera would really need it’s own posting to do it justice.

Oh, look, a camera post. What were the chances?

So – in no particular order, here’s what the newest generation iPhones will have for the camera geeks in the crowd:

A bigger imaging element. Yay. What this should mean is an increase in low-light sensitivity. One of the longstanding flaws in the iPhone cameras, almost since the word go, is poor (ie: completely terrible) low-light performance. If Apple was smart they would use this new real estate on the imaging element to correct this. However, it looks like the marketing droids got their way and instead it will be wasted on More Megapixels. Sad, really … for anyone with a brain “9 megapixels and awesome low-light performance” is much more enticing than “12 megapixels”. Marketing and brains are concepts that rarely intersect.

4K video. Okay, maybe that new imaging slab isn’t being completely wasted. Combined with the newest A9 processor, it will put legit 4K video – none of this upsampled tomfoolery – in your pocket. That’s pretty swank.

Siri learns that she has a camera. Yep. Siri gets eyes to go with her ears. Will it be as prosaic as “hey, take a picture” or will it be as awesome as “watch this area and tell me when the dog pees on the couch”? I’m guessing the former. I want the latter.

Faster burst mode. That new processing power means that bursts can be even more bursty.

Slower slo-mo. That new processing power means that slow-mo can be even more, er, slowy.

Awesome new editing and production tools. Did I mention that there is a host of new processing power here? I did? Good. You do the math on this one.

Printing comes back. Okay, it’s not part of the camera per se, but you can expect to see Apple get back into some sort of photo printing integration. Specifically, the “printing big-ass enlargements on canvas and the like to hang on your wall” … if nothing else, all those Shiny New Megapixels will give some pretty stunning large-format printing options.

There you go. Justice, done. Bring on the megapixels.